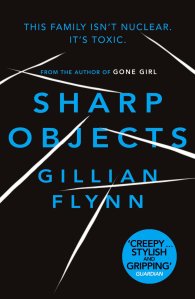 So last night I finished Sharp Objects. To say that I was uncomfortable and relieved to finish the book would be putting it very mildly. I think this book was way more creepy and uncomfortable than Dark Places.

There were scenes where I would cringe and then I’d stop and tell myself, it’s okay it’s just a book. And then I’d realise that someone actually thought about this stuff, actually imagined these kinds of things, and then wrote it down. For pleasure.

Okay, okay, it isn’t that bad. I’ve read and seen worse things than this book. Still, there was something hauntingly eerie about it which would make me incredibly uncomfortable throughout. I have to say though, Gillian Flynn is a heck of a writer.

I felt like I was there, watching it all happen. Of course, it would’ve worked out even better if I hadn’t had Modern Family on mute the whole time. Which of course, was extremely confusing. I didn’t know if I wanted to barf or laugh.

I have to say though, the book doesn’t hide the obvious killer. There really isn’t that many characters, and they’re not given a lot of importance, except for the killers. Plus, the book itself gives obvious hints. 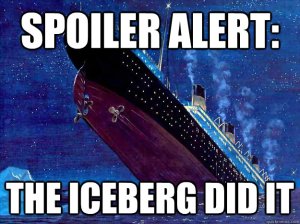 This family is toxic?

Why? Do they fart a lot? Or are you trying to tell me that they’re murderers without being obvious?

So, what’s the book about exactly?

It’s about a reporter from Chicago that gets sent to her hometown by her boss to cover some murders. Now, first of all… at the beginning of the book the relationship between her and her boss is like on neutral ground… but then we discover that he actually acts like a father to her? If you knew that her hometown is a place that fucks with her head… why would you send her there?

Honestly, I think he was the most fucked up character of them all.

So 2 little girls are found dead with their teeth pulled out. And so we spend most of the book following the character around asking people questions and watching her fail miserably as they slam doors in her face. And then she goes and cries, gets drunk and does sexy things with thy neighbour. Well, not technically with the neighbour, but you know…

We discover a few horrible secrets about her and her family. Fucked up secrets. And well, she does plenty of messed up crap during her stay. She seriously needs to get her drinking under control.

Don’t get me wrong. I did enjoy the book, quite a lot actually. I did find it a little fucked up (for some reason I’m swearing a lot today). I do hope they make a movie out of this, I think it’d be interesting, though I’d definitely skip watching it with my mother!

Did you guys read this book? Did you enjoy it? Let me know!

Annnddd… here’s a cat smiling, ‘cos I don’t know about you, but after reading this book I need to make sure there is still cuteness in the world!