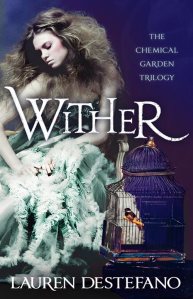 What if you knew exactly when you’d die? The first book of The Chemical Garden Trilogy.
By age sixteen, Rhine Ellery has four years left to live. A botched effort to create a perfect race has left all males born with a lifespan of 25 years, and females a lifespan of 20 years–leaving the world in a state of panic. Geneticists seek a miracle antidote to restore the human race, desperate orphans crowd the population, crime and poverty have skyrocketed, and young girls are being kidnapped and sold as polygamous brides to bear more children.

When Rhine is sold as a bride, she vows to do all she can to escape. Yet her husband, Linden, is hopelessly in love with her, and Rhine can’t bring herself to hate him as much as she’d like to. He opens her to a magical world of wealth and illusion she never thought existed, and it almost makes it possible to ignore the clock ticking away her short life. But Rhine quickly learns that not everything in her new husband’s strange world is what it seems. Her father-in-law, an eccentric doctor bent on finding the antidote, is hoarding corpses in the basement; her fellow sister wives are to be trusted one day and feared the next; and Rhine has no way to communicate to her twin brother that she is safe and alive.

Together with one of Linden’s servants, Gabriel, Rhine attempts to escape just before her seventeenth birthday. But in a world that continues to spiral into anarchy, is there any hope for freedom?

I’m going to be honest, I’m not entirely sure how I feel about this book. While I read it, I was enjoying the story and thought it was very interesting, but once I finished it, I started to become a little confused.

The idea behind this story is quite unusual and interesting, the main problem is, the author doesn’t actually explore it. We don’t really get any information about the society they live in, why there’s a virus killing people and how the virus works. Why do you die exactly at the age of 20? It’s not possible to reach 21? The virus is that precise? We’re only told that there are people searching for a cure. That’s it.

Another big problem I had were the characters. It’s not that they’re unlikeable, it’s just that their motives aren’t clear, and the way they act doesn’t always make much sense. The three girls in the story; Cecily, Jenna and Rhyne, are sold off to a rich family and made to marry the son. Now, from the beginning, Jenna informs us that she hates the newly acquired husband because (spoiler alert), her sisters were murdered because of him.

I’m sorry, but if I was kidnapped, made to marry a guy with another two girls, watched my sisters get murdered by the family I’m marrying into… Well, I would not be happy. And I would especially not be sitting around calmly, reading books and sipping tea. But, oh, it’s okay… Because deep down she’s broken.

The main character, Rhyne, is also a little unbelievable sometimes. She doesn’t really put up enough of a fight in my opinion. Why aren’t they kicking and biting? Why this calmness? I know it’s said to be normal in their society the whole kidnapping girls and stuff, but does that justify them being so okay with it? I mean, there is human trafficking going on in our world… if that happened to me, I wouldn’t just lie there and be like…

“Oh, I’m missing an organ, but that’s okay, nothing I can do about it, it’s normal nowadays…”

Another thing I really didn’t get was… If the whole point of getting young men to marry many young girls is to get them pregnant in order to have as many babies as possible to keep the human race going… then, first of all, why just three wives? Why not seven? Or ten?

I know that’s fu***d up, but it makes more sense. Also, if the girls can only live until they’re 20… why get an 18-19 year old bride? What sense does that make? The normal thing would be to get brides as young as possible, so there’s enough time for them to have a lot of babies.

Jeez, just talking about this book makes me look like a very sick person.

The book isn’t a bad read, but it could’ve been much better in my opinion. Not enough happens. It’s a trilogy, so I’m guessing the next books will have some explanations towards the whole virus and society issues.

I would warn you that the content in the book isn’t for very young readers, or people that are sensitive. There is no sexual graphic scenes in the book, but the male lead does sleep with two of his brides… one of them being 12-13 years old while he is 21, and she becomes pregnant.

So, have you read Wither? Did you love it or hate it? Let me know!

Have a great day! And here’s a rainbow butterfly unicorn kitten!

8 thoughts on “Wither by Lauren Destefano; A Review”